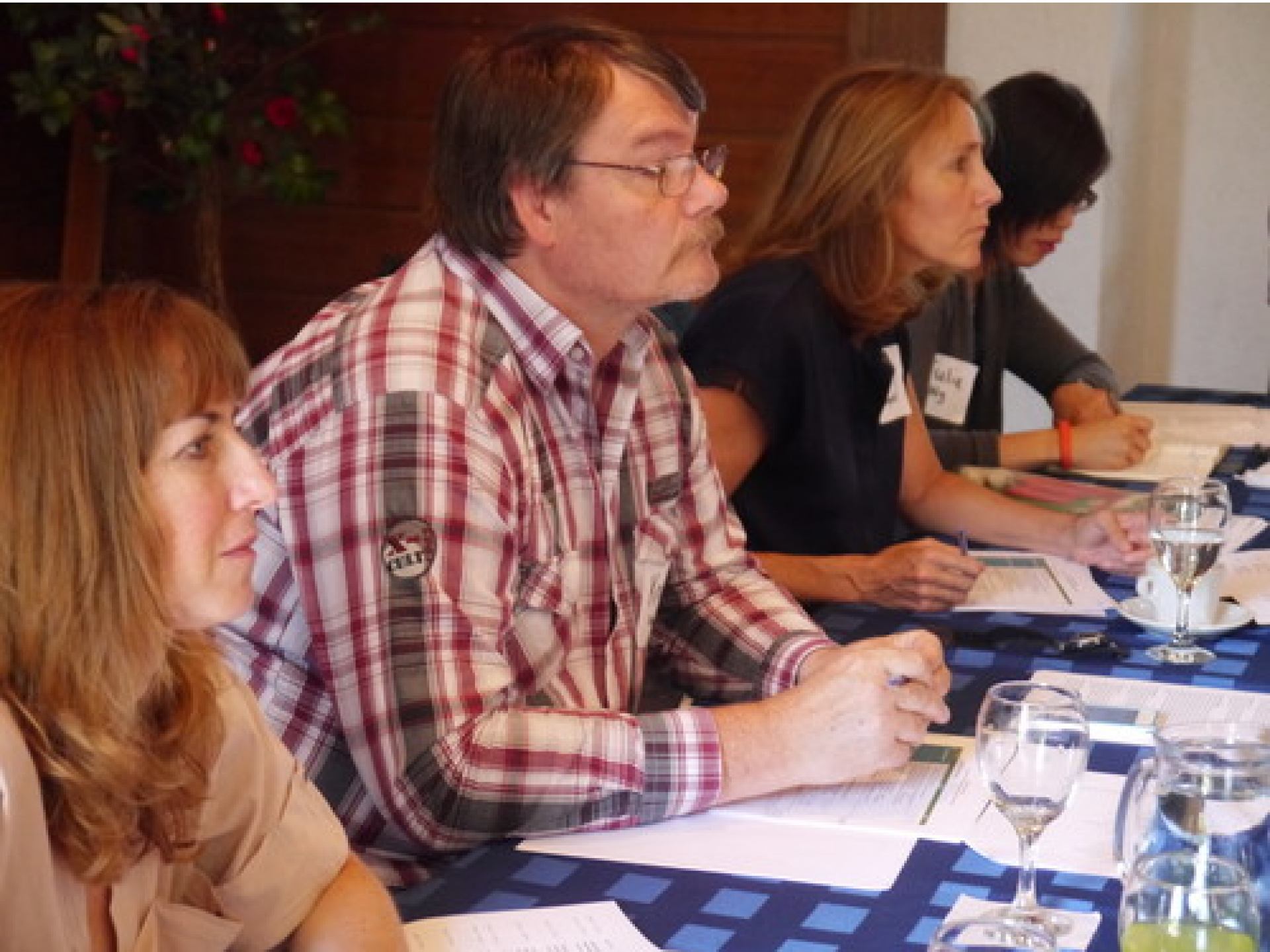 Muharrem Abdullahu earned his degree in Marketing and Sales from Economic Faculty. His working experience is diverse but largely linked to agribusiness. Currently, he works to develop a business with different organic fruits and vegetables using hydroponic system.

Zoran Bojovic is president of the NGO Association Gorica which is a genuine local civic environmental association gathering hundreds of volunteers inspired by Zoran’s enthusiastic leadership. Among other activities, the Association Gorica has so far conducted the following: many educational visits for schoolchildren, organized a 5000 signatures petition, numerous press conferences, over 100 actions of cleaning, greening, and introducing safety measures in the park-wood Gorica with over 1500 participating, as well as advocacy action for establishing a legal framework on environmental protection in Gorica Park. In 2014, Zoran was awarded Green Star Award by Agency for Environmental Protection and OESC recognizing his public engagement efforts.

Dragojle Bozic has been teaching physical education for nearly 20 years at the elementary school in Luznicka valley, near Uzice city in Serbia. In 2010 and 2011, he organized eco-camps in the village of Ribasevina as well as cycling tournaments and “School Olympic Games” for students from the region. Dragojle is also a producer of organic raspberries. For the last two years, Dragojle has been cultivating raspberries in accordance with the principles of sustainable agriculture. Additionally, he has been developing briquettes for a barbecue out of biological waste generated from growing raspberries. He is devoted to the development of Ribasevina village and protection of its rich biodiversity and wishes to have the village and its school become a center for environmental education in the region. Dragojle is also associate of the Serbian Owl Conservation Center. He is married and has two children.

Miljko Bulajic is the founder of the Nature Lovers Montenegro Association. He is a licensed rafting and kayaking guide, a lifeguard in wild waters, and philosophy student. Miljko has ten years of experience in various outdoor activities worldwide. Nature Lovers Montenegro was created with the aim to get people closer to nature and its beauty, both in Montenegro and beyond. Over the past months, Miljko’s team has gathered international guides and nature enthusiasts to visit some of the most beautiful parts of Montenegro (mountains, islands, lakes, etc). He also has participated in the campaign against the damming of rivers in the Balkans called Balkan Rivers Tour. Nature Lovers Montenegro is part of the global environmental movement “Let's do it”. Going forward, MIljko plans to join various actions with a focus on natural and renewable resources. He works to enable people to experience nature in its most perfect form - through adventurous, relaxing, and educative outdoor activities.

Andrijana Dabovic was born in 1981 in Nudo, Grahovo region, Niksic municipality in Montenegro. She finished the High School for Tourism and Hospitality in Trebinje, Bosnia and Herzegovina (BIH). Andrijana graduated in economic diplomacy from the Faculty of Economics in Banjaluka (BIH). She has been an ICT coordinator in the Primary School „Dragan Kovacevic“ in Nudo since 2010. Andrijana has several hobbies: growing flowers, cultivation of ornamental plants, gardening, and reading.

Kastriot Faci is the manager at The Door, civil society organization situated in Shkoder, northern Albania. Since 1999, he has been involved in various projects experimenting with new approaches to social inclusion for vulnerable groups such as children, youth, and disable people. Some of the initiatives Kastriot has ran include: The Musical Troupe for Disable People, Female Football Team, and Dance Troupe for Roma and Egyptian Girls. The most recent idea of The Door which tackles social inclusion is the project Kastriot is presenting at the regional competition, The Agro-tourism Eco- Social Farm.

Rozeta Gradeci is COSPE country representative in Albania. She has worked with this international NGO since 1999 and has been involved in different types of interventions in the field of environment, democracy, social services, tourism, public services, local community participation, rural tourism, cultural and natural heritage et al. Building on her love and enthusiasm for the work and in collaboration with other colleagues, Rozeta created the best model for public services based on the inter-communal collaboration in the rural areas.

Blerta Guxha graduated in 2014 from the faculty of General Medicine. She has a record of volunteering with civil society organizations since she her high school age. Currently, Blerta works as a doctor at “Kuban” hospital in Tirana and is the Executive Director of Albanian Society in Development, an NGO founded in 2000. The company she is representing at the competition is run by her father whom she will represent.

Luan Hasanaj is the co-founder of Hambar Shpk. Hambar started as an idea back in October 2015. The shop opened in May 2016 and has been a great hit in Pristina community through online campaigning and appearances in various TV shows. Additionally, Luan served as Lead Coordinator for “Let's do it” Kosovo which is a part of “Let's do it” world movement. Under his leadership, this organization managed to mobilize thousands of volunteers throughout Kosovo to successfully clean up hundreds of illegal dumpsites in the five year period. Hambar Online builds upon this legacy aiming to establish certain environmental standards among Kosovo's business community. The idea is to set an example of a sustainable business operating in a sustainable environment.

Slavica Ilic has been engaged for the past three years in the raw vegan food production under her “Root, Leaf, and Fruit” ("Koren, list i plod") brand. She grows vegetables on a plot of land within the City Garden, one hectare of land which City of Sabac donated to citizens for growing healthy vegetables and herbs. Thanks to Slavica’s initiative, citizens of Sabac have an opportunity to know more about tasty and healthy products that she has been preparing. Also, they can grasp the whole concept of healthy raw food. For many years already, Slavica has worked as manager and salesperson at a local trade firm. However, she feels the moment has come for her to start running her own business which will merge her love for a healthy way of living with the growing needs and demands of her fellow citizens for the healthy food supply. In her free time, Slavica enjoys hiking and gardening.

Ana Kolovic is a licensed landscape architect. Her areas of expertise include landscape and urban planning, planning and design of urban open space, environment and nature protection. She is dedicated to local green ideas and eco-solutions in urban spaces and thinks that small steps can make a huge change. Following this vision, Ana and her three friends and colleagues, landscape architects, formed the team which designed and constructed the unique, eco-friendly, and educative product - a vertical green system, BIO – wall. BIO - wall can directly impact the amount of green spaces in urban areas. Ana wishes to grow this business which involves promotion, production, installation, and maintenance of modular, vertical system BIO – wall. More, she aims to employ women from the local community who lost their jobs along with professional women of similar expertise. Additionally, Ana works at PUC Greenery - Belgrade, where she has implemented numerous public and private projects throughout the city Belgrade.

Argjire Krasniqi is the founder of the NGO ECOciety.  She is the organizer of the sustainability and green architecture festival in Pristina called ECOWEEK, which is happening for the third time this year.  The festival lasts for one week but gathers over 3,500 direct audience and participants. Through ECOciety, Argjire aims to change the practices towards sustainable architecture in Kosovo and abroad. To do so, ECOciety directly implements and realizes sustainable architecture projects. One of the examples of such approach is building the first Eco house in the country. Argjira is a freelance architect, who graduated from the University of Prishtina’ Department of Architecture. Additionally,  she accomplished master studies at Vienna University of Technology. Argjire has worked in several NGOs as well architectural and design studios in Kosovo, Switzerland, and US.

Marta Mojsova is an interior and furniture designer. She has been employed in her family architectural studio for eight years. Her biggest interests are in the field of reuse design. Marta finished her studies at the Faculty of Forestry in Macedonia with a specialty in Design and Technology of Furniture and Interior. After completing her master studies at the American College’s Faculty of Architecture, Marta went to Barcelona to continue her education. She holds MA in Interior Design of Commercial Spaces from IED- Barcelona. She is a co-founder of the non-profit organization „Cultural Connection“. In addition to organizing various workshops in the field of reuse design, Marta’s work include organizing charitable selling exhibitions (funds are further invested in Roma children), designing reusable packaging solutions for Tikvesh vinery (Skopje Design Week 2013), designing scenography out of waste materials (Skopje Creative Hub 2014), and running a project for Reuse Design (Creative Industries, 2015).

Stefan Perchinkov is 23 years old coming from Skopje, Macedonia. He graduated economy from the Economics Faculty of the Ss. Cyril and Methodius University. Stefan is currently enrolled in master studies on E-Business at the Management Department of the same faculty.  He is a member of the Rotaract Club Skopje for five years and will take on its two-year presidency from September 2016. Among many activities Stefan has run at the club, awareness-raising and fundraising events for marginalized groups of people are the most frequent. During his studies, Stefan worked on selling investment policies with Ilirika Investment Fund and as an online facilitator for foreign and domestic companies wishing to buy or sell certain products online.

Ana Rafailovska was born in 1983 in Skopje, Macedonia. In 2014, she earned MSc in Sustainable Architecture from Politcenico di Milano, Italy. Ana graduated architecture in 2010 from the Ss. Cyril and Methodius University. Since 2007, she has been advancing her expertise as an architect by working in different construction companies and architectural studios. In 2012 and 2015, she was part of the seminars on straw bale building held by Sissy Hein from FASBA, German National Association of Building with Straw Bales. Over the last two years, Ana has specialized in straw bale structures and passive solar design. She has been networking intensively with individuals and organizations interested in these matters both in Macedonia and abroad. Ana has a special interest in sustainable housing systems in rural and urban areas. Along these lines, she has studied deeply the permaculture theory, design, and practice and its application in architecture.