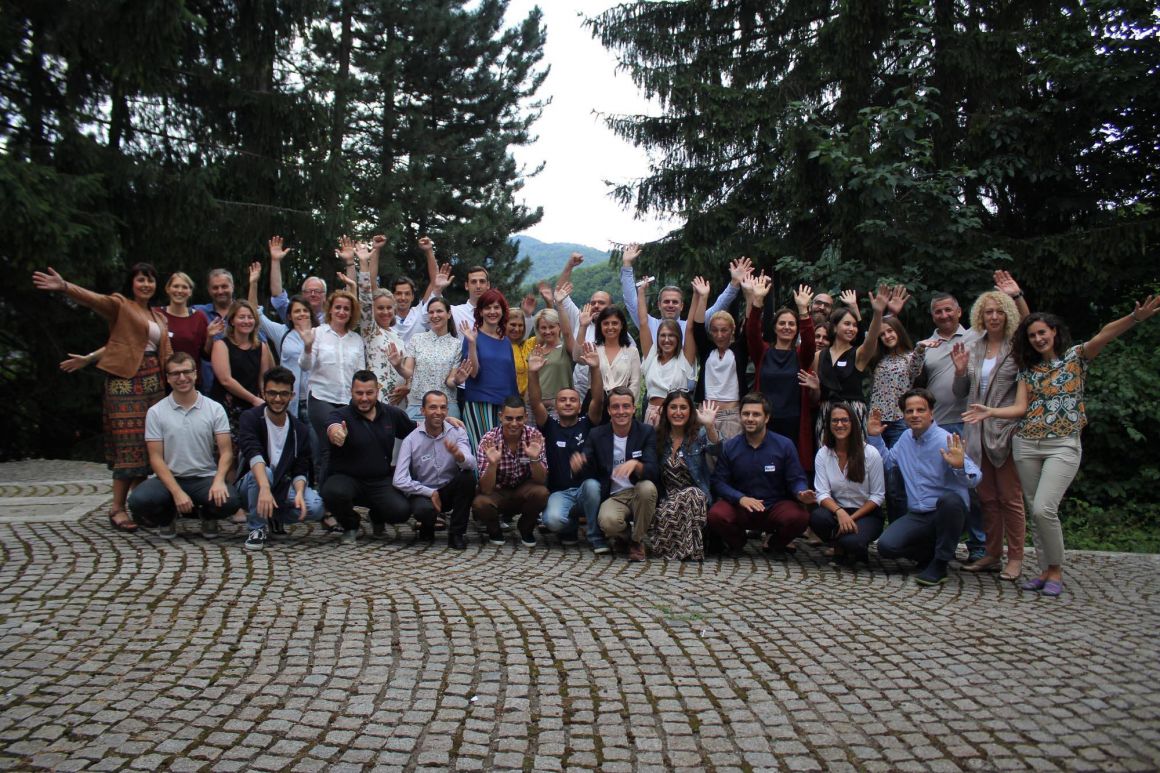 Samir Arnautović studied law, peace and security, and got an MA in international relations and diplomacy. During his studies, he was a university senator for four years and a member of a legal committee. As a prominent student leader he was elected as the first student vice-rector at the University of Sarajevo after almost 40 years. As a senator and vice-rector he participated in the creation of a new High education law, encouraged higher participation of students in university management and participated in the organization and coordination of flood management action. He was also the creator and chief editor of weekly and biweekly student newspapers UPRAVU, SPONA and KAMPUS. He wrote two published books - short stories collection and a manual for student organization. Samir is passionate about painting, drawing, designing, constructing and plays several musical instruments. He loves outdoors, and has advanced knowledge on mushrooms. His first love is his wife and his second love is cooking. Currently, he is the president of the NGO: Odisej, dedicated to youth education.

Natalija Burgieva (35) is a graduated economist coming from Skopje, Macedonia, with 10 years of working experience on different job positions in the field. Natalija is currently looking to continue his education in the field of Green Economy, narrowed to land and soil in the context of a green economy for sustainable development, food security and poverty control. She is an active member in Red Cross Macedonia and participant in their projects. She is also a member in S.O.S Detsko selo and other NGO's. As a member and active participant of “One Can” – single parent supporting group, she has seen the problems of this marginalized group and found a solution. At the moment she is founding MaMaOrgana-Social Enterprise for single moms, where they provide healthy food and material support through green ideas for their families, according to their own needs. Natalija also runs “Ljubov na Vtora” (Love at second sight) – a social media group, where she promotes the reuse and recycling of old objects with the application of new techniques. She is also the author of the MaMaOrgana blog for permaculture and sustainable living at WordPress Platform. Natalija is a mother of two.

Vucic Cetkovic is a young painter from Podgorica. He has been into painting and drawing ever since his childhood, more intensively in the past several years in his art studio in Podgorica, where he creates his pieces using oil, acrylic, drawing and collage techniques. So far, he has had exhibitions in Montenegro, France, UK, Austria, Germany and Spain. He graduated from the Faculty of Economics, the University of Montenegro. Then, he specialized at the Diplomatic Academy in Vienna in the area of Conflict Resolution, as well as at the Academy of Banking and Finance in Belgrade in the area of financial risks. He worked as an intern at the Commercial bank A.D. Budva, where he acquired further professional experience in banking in the sector of risk management, and he also served as a financial manager at the NGO Centre for Civic Education.

Mario Crnkovic is a thirty-year-old computer scientist from Bosnia and Herzegovina, dedicated to social activism and peace-building for several years. He has helped over 100 projects where young people were the bearers of positive change in their local community. In addition, he is an active member of the non-governmental organization "Green Team", where he gives an immense contribution to raising ecological awareness. He is a winner of several honors for an outstanding contribution to the development of the Youth Bank program.

Miroslav Garic is a chemistry student on his final year of studies at the Faculty of Sciences. He is motivated to make a positive change in the life of the people of his community, Kragujevac (Central Serbia). Together with his fiancée, Marina Miladinovic, also a student of environment at the same Faculty, he started producing rare cosmetic oils (rosehip oil, blackberries seed oil, plum kernel oil, apricot kernel oil etc.) and dry fruits.

Jasmina Grbovic Novakovic holds a PhD in Physical Chemistry and currently has the position of Principal Research Fellow in Vinča Institute of Nuclear Sciences in Belgrade, Serbia. Jasmina is leading 7 international and one national project related to materials for renewable energy storage, mainly hydrogen storage. In 2009, she was awarded with the Outstanding Service Award from the International Association Hydrogen Energy for contributing to the popularization of hydrogen and renewables in Western Balkans. Jasmina wishes to start the production of quince and help her cousin to encourage and enable sustainability and the economic independence of his rural household.

Besart Konushevci is a 23 years old from Prishtina, who has a vision to build an EdTech startup for developing countries such as Kosovo. Besart has graduated from the International Faculty of University of Sheffield where he studied Business with a concentration in Finance and Accounting. His career was developed working for a Bank, Public Administration, and lately for a Higher Education Institution. During his studies in Thessaloniki, he was determined to use his skills and knowledge towards building the biggest EdTech company in the region; namely Platforma Akademia. Regional countries are being challenged by issues such as low quality of education and the integrity of Universities. Therefore, Besart believes that investing in improving the quality of education, prepares younger generations for the labor market and consequently contributes towards social and economic development. He works with a team of engineers and experts in the field of education, who believe will play an important role in reshaping the education system for the region. The message Besart is trying to transmit while working at Platforma Akademia is that technology and education are the present and the future of social prosperity.

Fisnik Kuqi is born on March 30, 1986, and he has finished primary and secondary school in Gjakova, continuing his university studies in Prishtina. He started working in one of the banks in Kosovo in 2008. His hobby is paragliding in the mountains. He started to cultivate mushrooms in December 2016, while the first mushroom he enjoyed is April 2017. In May, he attended a 10 day course in Holland for the cultivation of mushrooms.

Edvin Lamce holds a degree in History from the University of Tirana (2000-2004) and earning a profile in Archaeology. During 2008 – 2009, he completed a two-year program in archaeological restoration, which was organized by the Department of Archaeology, Bologna University (Italy) in Albania. Edvin is a project coordinator with GF and a certified national tourist guide in Albania. He is very good in proposing and coordinating the successful implementation of projects in the field of culture heritage and development. Recently, he is very involved in tourism as a tour manager and organizer of itineraries, especially in the South of Albania.

Kreuza Lubonja is the Founder of Aroma Therapy Albania since June 2016, the first aromatherapy company in the country. The aim of the company is to create and promote healthy natural products with organic Albanian Essential oils, for skin, hair and ambience. Kreuza has an extensive experience in the field of business development and with a master’s degree in Executive MBA.

Milan Mijajlovic is the president of the NGO Scout Group “Njegos” from Podgorica. He is dedicated to ecology, organizing many environment protection activities with children and youth.  Milan’s hobbies are related to website development (free platforms) and software and hardware maintenance.

Nikki Murseli is born in 1989 in Prishtina and graduated from Sapienza Università di Roma in the department of Architecture and Civil Engineering. She is the co-founder of the first social and cultural center in Prishtina "Termokiss". Currently she is working at the architectural design studio MA+P and continues to contribute as a volunteer at "Termokiss".

Slavica Orelj is a passionate breeder. She is cultivating and studying plants on her little agricultural holding. She inherited the love for nature as a young girl from her grandfather who was a fruit-grower and from her grandmother who was a medicinal herbs gatherer. On her farm, Slavica is raising only those species that can survive on their own in nature. She believes that nature has the best answers to the most challenging questions. This motto inspires and guides her in her work and private life. Slavica believes that modern life style and nature don’t have to be necessarily opposed. This inspired her to devise Pompon, gluten-free pumpkin pasta, made in nature, without complex technology, simple to cook, that perfectly suit individuals, especially those people on special dietary needs.

Kristian Shopov (29) is a graduate economist at the Marketing Department- St. Cyril and Methodius University in Skopje.  His hobby that grew into a profession is illusionism. For 14 years he has been making children and adults smile and keeping them entertained. In his illusionist career, he had over 1500 performances. Most of the performances are for children's birthdays but also for corporate events, such as New Year's celebrations, promotional events etc. On May 15, 2011 he held the first Festival of Illusion in Macedonia at the Universal Hall in Skopje, which was attended by 1500 spectators. Kristian’s biggest satisfaction comes from his humanitarian performances because they help the marginalized people. He has performed for the Red Cross of the City of Skopje, the Humanitarian Association “Queen Esma and Stevo Teodosievski”, the First Children's Embassy “Megjashi”, the Animal Protection Association “Anima Mundi”, and for the refugees at the refugee camps in the country.

Adriana Spahiu is the coordinator at the Development Alternative Resource Centre (NGO) since November 2016. Previously, Adriana has volunteered for the organization on advocacy and lobbying for environmental and youth issues.  She supports the Project Managers in their day to day duties; coordinates project work for better implementation of the activities; tracks, analyzes and reports on project status and also, ensures that project communications run smoothly, keeping key stakeholders and decision makers engaged. She holds a bachelor degree from University of Tirana, Faculty of Foreign Languages, Italian Branch and currently is attending masters for "Communication and Cultural Heritage".

Nebojsa Vucenovic is 34 years old, and comes from Povelic, a village near the municipality of Srbac (north of BiH). He finished the elementary and secondary trading school in his hometown. Currently he is employed in the Srbac municipality at a postal delivery. He is a member of the mountaineering association "Videta" and he likes to spend his spare time with his friends in the mountains. He is also a member of the Association of Parents and Children with Special Needs "Izvor" from Srbac. At home, he raises goats, and recently he tried to produce a natural soap from goat's milk and thus, launching the "Step Forward" project based on the production of natural soap of goat milk, having as a goal to bring together and socialize young people, while learning something new.

Jane Zaevski is 24 years old from Skopje, Macedonia with a business mind and a philanthropic heart. He earned his degree in Economics at the Ss. Cyril and Methodius University. He was awarded with a one year full scholarship educational stay at the Programme of Management and Finance at the respected Karl-Franzes University in Austria.  Jane is currently enrolled on Master of Sciences in Project management and working full time in the field of finance. He has done one month of European Voluntary Service (EVS) in Altamura, Italy for a project that aimed to help locals organize events on making their city greener and festivals for raising awareness for old forgotten values. He is passionate about nature and making the society a better place to live.