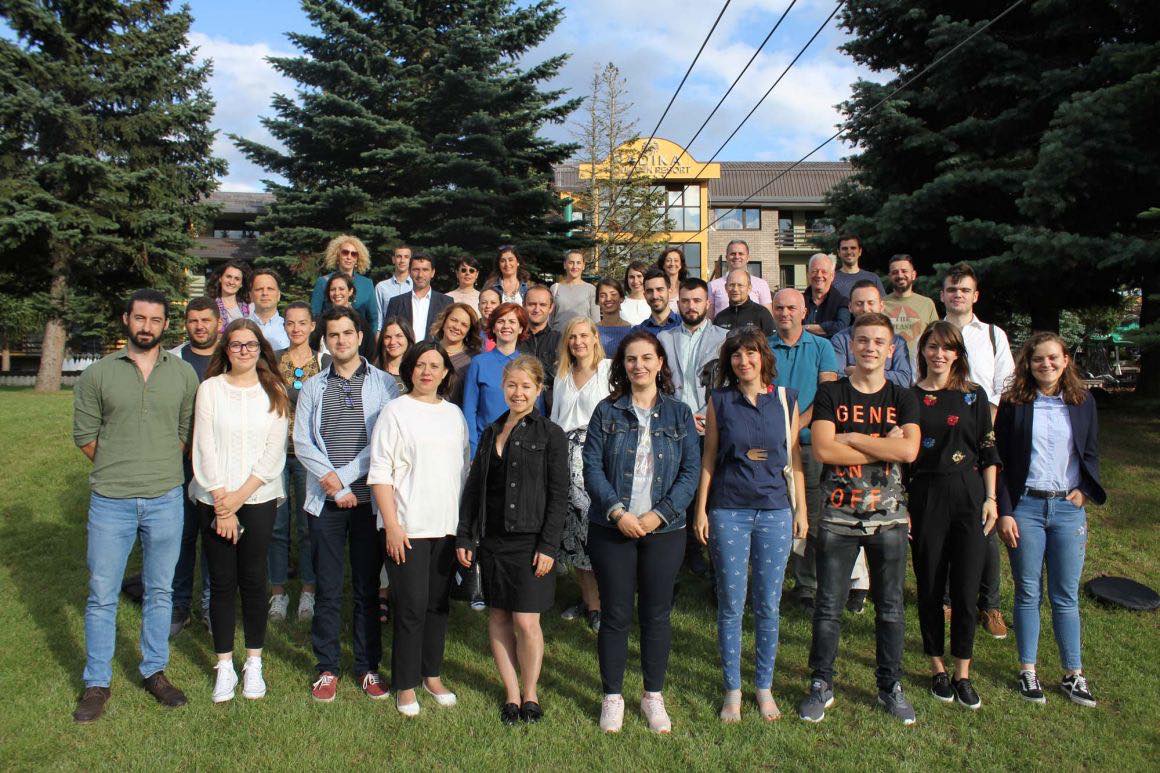 Majlinda Avdiu is 17 years old and she comes from the municipality of Lipjan (a small city of Kosova). She is a student of the 12th grade at the Gymnasium of natural sciences "Ulpiana"-Lipjan. She loves natural sciences, and she works hard to learn it, which is why she’s won many medals in different competitions such as the NASA “Parker Solar Probe.” She is passionate about astronomy, computer science and learning many new languages. Her hobbies include writing and learning new things.

Dino Dizdarec was born in Sarajevo 1984. For over 9 years he is employed as an IT professional. He has been dealing with organic farming for the past 14 years. His life goal is to a secure a better life for people with disabilities, and to educate young people about the importance of organic farming.

Ivana Dragovic is 21, a 2nd year student of Faculty of Food Technology, Food Safety and Ecology. She is one of the founders of NGO Green Mind, president of the organization, project manager and Igla&Konac upcycling center manager. She does photography both professionally for events like graduation and weddings, and also as a leisure time activity. Her volunteer engagement includes involvement in Red Cross, NGO Zero waste Montenegro and NGO Our Action. Her activities include participation in ''Peace Education Program'' hosted by the Center for Civic Education (CGO), representing Green mind at Green Culture Festival 2018, finalist of the VII Stock Exchange of entrepreneurial ideas organized by the Faculty that she attends, and many more. She is a vegetarian and adores nature, which is one of the reasons for initiating NGO Green mind. She spends her leisure on hiking, walking, cycling, playing, dancing, and yoga. She is creative and has a lot of energy. She loves company, adventures, going out. She sees herself with people who are changing this world!

Jasmina Glavinche is a 37 years old who is eco-minded, multidisciplinary designer and is a paper maker. Currently, she is studying sculpture at Academy of Fine Art in Skopje. In 2011 with strong aim to collide the worlds of art, business, and nature, she founded her creative studio, WIZART, which develops, produces, and sells recycled paper, embedded with seeds and jewelry made from wood waste. She is committed to make sound, beneficial choices and positively affect the world. The experience she gained from working with people with disabilities in the past two years inspired her to work on a new social innovation model involving marginalized groups in the production process.

Zana Hamza is 22 years old. She was born and raised in Prishtina, Kosovo. She was a student in "Sami Frasheri" high school- mathematics and informatics gymnasium. She is a computer engineer, graduated in University of Prishtina, "Hasan Prishtina". She was a distinguished student and won a scholarship in the first year of studies. She loves technology and programming. She also loves working with children and exploring their potential. Currently, she's a trainer in jCoders Academy, an education center for children age 8-18, with main focus on technology. In her free time, she usually goes hiking and reads books.

Miho Ilic is an 28 years old electrical engineer who was born in Zagreb (Croatia), raised in Kotor (Monrenegro). He graduated in electrical engineering at the University of Montenegro 3 years ago, and since then he works in one small IT company from Podgorica. He is also interested in traditional crafts like carpentry and building of dry walls, painting and agriculture. He inherited an olive tree farm from his grandfather, which he is planning to revitalize and start producing extra virgin olive oil. He is also a passionate traveler but he feels most relaxed when he is in Boka Bay, cultivating his olive trees

Rajko Kecman comes from Banja Luka. As a young person, he decided to start a business, with the help of the Mozaik Foundation. His business is Urban Roofs and Greens, where they design, execute and maintain green roofs, green walls and green areas. So far, they have established partnership relations with world leaders and pioneers in numerous areas of modern architecture. Some of the partners are German company ZinCo GmbH, Israeli company Vertical Fieled, Serbian company Gras Garden and others. They believe that through their actions, they will change the future and life of future generations by using smart green cities. They contribute in reducing CO2, increasing the number of green areas, reducing floods in smart green roof systems and much more.

Andi Krasniqi is born on November 22, 2001 in Gjakova. He has completed the primary education in the village of Xerxe. He is a student at SHMLP "Selajdin Mullabazi-mici" in Rahovec that focuses on pharmacy studies. He has many passions but the one he would like to mention as outstanding would be the passion for scientific discoveries.

Petar Martinovic is 30 years old and he holds a master degree in biology. He is very passionate when it comes to science, especially animals. He used to have several tarantulas as exotic pets and he was also raising food for them which included several insect species. He is unemployed at the moment and his wish is to start food production in a responsible and sustainable way, which for him is the only way!

Aleks Tane is currently serving as a board member of the Vjosa Explorer Association. Tane graduated in the Art Academy in Bucharest Romania.  Today he is a local development agent in a non-profit organization, managing projects related to sustainable tourism development, and is a certified tourist guide specialized in hiking and rafting. Tane has participated in many national and international fair regarding the promotion of tourist attractions and traditional products of the Përmet district. He is the member of the Slow Food Convivium Përmet and a volunteer for many initiatives undertaken by various actors in environmental protection, youth engagement, and social issues, Tane is a specialist with exceptional communicative, organizational, and managerial skills with a passion for the environment and sustainable development.

Marija Mitevska is born and raised in the small town Kriva Palanka located in North-East Macedonia. She earned her bachelor's degree as a professor of Physical Culture and Sport, and currently is finishing her master's degree at the Faculty of Art and Design at the EURM (European University - Republic of Macedonia) in Skopje.
Maria's previous job was as a personal trainer in Manhattan, New York. Her love for sports, sport charitable events, and sportswear made her the founder of "Pink Support Mk"- non-profit organization for support of marginalized groups in Macedonia. She started the initiative "Pink Run"- 10k and 5k races for charitable causes. The passion she has for cycling and long-distance running made her the first woman in Macedonia who ran and biked across Macedonia and made a sports documentary called "Stay Different (run-bike-repeat)."

Ensar Perco was born in Tešanj, Bosnia & Herzegovina on 14th of January, 1996. Currently, he is working as an international consultant in agriculture commodity sector for Australian manufacturing and trading company.

Milan Petrović is a father, and entrepreneur and a language teacher, but he is always striving to push his limits even further. He is interested in non-formal education and he is the founder of a co-learning hub Unbox as well as the author of several innovative projects in the field. According to him, modeling and 3D printing is a chance to get motivated to recycle and care about the environment in a modern, proactive, whereby being thrilled to be one of the first to start this great eco revolution in the region.

Pezana Rexha has studied architecture at The Polytechnic University of Tirana and graduated in January 2010. She has been working since she was 14 and has created her first enterprise when she was 18 years old. In April 2013, Pezana took part in the competition for social enterprises, “Green Ideas”, which gave her the possibility to create an innovative enterprise, “Pana,” that nowadays, has quite a huge success in the market. Pana is a social enterprise that produces unique design furniture and accessories by upcycling reclaimed wood, old pallets and old wood furniture. Pana’s employees are people from marginalized groups (orphans, retired, Roma and Egyptian community and people with special needs) aiming to give them the possibility to have a profession and a decent life. According to Pezana, small countries like Albania provide the possibility to create a social enterprise, something innovative, and most importantly at the same time protecting the nature.

Darko Savljic was born on St. Valentines in 1974 in Podgorica. An ornithologist by profession, he is the founder and during a long period, director of the Society for animal protection Podgorica - the strongest green NGO in the country.  He has built the first asylum for cats and dogs in Montenegro. He has been a guide and mountaineer of the Mountaineering society Komovi which this year celebrates 40 years since founding.  He works for the betterment of lives of animals, especially birds in Montenegro. Darko has published more than 90 scientific papers, mostly abroad.

Aleksandar Scepanovic is an entrepreneur from Belgrade. Along with his brother Ninoslav, in 2009, he designed and built the log-hostel Montana on Kopaonik Mountain in southern Serbia. Over the past 9 years they have hosted hundreds of guests from all continents and today "Montana" is the best rated Kopaonik accommodation on all relevant web sites, and it's included in Lonely Planet's guide for South East Europe as a recommended accommodation. Along with the expansion of Montana's capacity, Aleksandar, with his two associates, works on a new entrepreneurial project called Zanateria. Zanateria aims to gather all small producers of food, beverages, clothes, footwear, cosmetics, furniture, souvenirs, and jewelry and create an important alternative online store while also creating some kind of "craft syndicate" that will encourage networking and education of the entire craft scene in Serbia.

Albi Sulo is an environmental specialist and an environmental researcher graduated in Bachelor and Master Degree with maximal grades in Guglielmo Marconi University, Rome. Last years as a personal experience, he has studied through several environmental organizations and did different researches about international studies of the phyto-climatic areas, concerning plants, their areas and habitats. Mostly, these researches and experiments are made with cactus succulents (such as Aloes) by experimenting with their climatic adaptation, soil typology, pH level or water requirements, soil analysis before and after planting, crossing different varieties, etc. Except schooling and his researches, Albi Sulo was also the Albanian National Tennis Champion and besides being a professional tennis player, he is also known for a great contribution to the design of various projects for the Albanian Tennis Federation funded by the International Tennis Federation.

Kristina Todorova is 20 years old. Currently she studies at the Ss. Cyril and Methodius University in Skopje at the "Faculty of Agricultural Sciences and Food". Kristina is a project coordinator at the Civil Society Organization "Ekovita" from the city of Negotino located in Central Macedonia. She has been involved in several projects and recently she took part at Training for Organic Production where she developed the idea for making the "gadjun"- a wonderful product made from Grape Malt Syrup and Reishi Mushrooms. Kristina also works with the production of mushrooms and together with the Ekovita team, delivers various trainings.